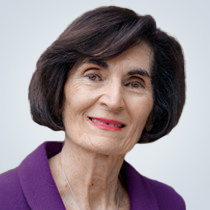 A former student of the École Normale Supérieure and holder of an Agrégation degree in physics and Doctorate in science, Colette Lewiner joined Électricité de France in 1979.

In 1989 she created the Development and Commercial Strategy Division, thus becoming the first woman appointed Executive Officer at EDF.

From 1992 to 1998, she was Chair and Chief Executive Officer of SGN, a subsidiary of AREVA-Orano.

In 1998, she joined Capgemini to create and manage the Global Energy and Utilities division until June 2012.

Since July 2012, she has been, as Manager of Cowin, a Consultant in the energy field.

Colette Lewiner has been a Director of EDF since April 2014.