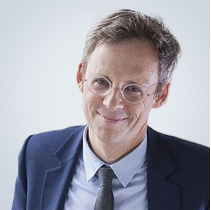 Fabrice founded Eiffel in 2008 and led the spin-off from the Louis Dreyfus group in 2011.

Under his leadership, Eiffel grew its AuM to ca. €3.5 billion across equity and debt strategies and generated €100+ million of retained earnings.

Fabrice currently leads a team of 60+ professionals, of which ca. 20 are dedicated to Eiffel’s investment strategies in the energy transition.

Previously, Fabrice served as CFO of Neuf Cegetel where he oversaw the IPO of the group on Euronext Paris in Oct-2006, its M&A strategy with 10+ bolt-ons and its sale to SFR in 2008.

Fabrice has overseen all of Eiffel’s energy transition investments since the company’s creation in 2008. He is a member of the investment committee of Eiffel Essentiel, Eiffel Energy Transition and Eiffel Gaz Vert and supervised more than 100 investments in this capacity.

Fabrice graduated from Ecole Polytechnique and earned an MBA from Harvard Business School.

Selected executive experience and board seats